Barbecue, beer and boats – can you picture anything more American? The Fourth of July is upon us again and there’s no better way to celebrate Independence Day than by getting out on the water with friends and family to soak up the Summer sun at some of America’s best boat party coves and meetup spots!

Here we’ll take you on a quick tour around the country to compile some of the best 4th of July boating destinations for boaters who want to watch the fireworks from the water. Whether you’re on the East Coast or West Coast, or somewhere in between – this guide will help you discover the most popular meetup places for floating boat parties, the best waterfront fireworks displays and the most serene locations for a quiet family escape on Independence Day 2022. 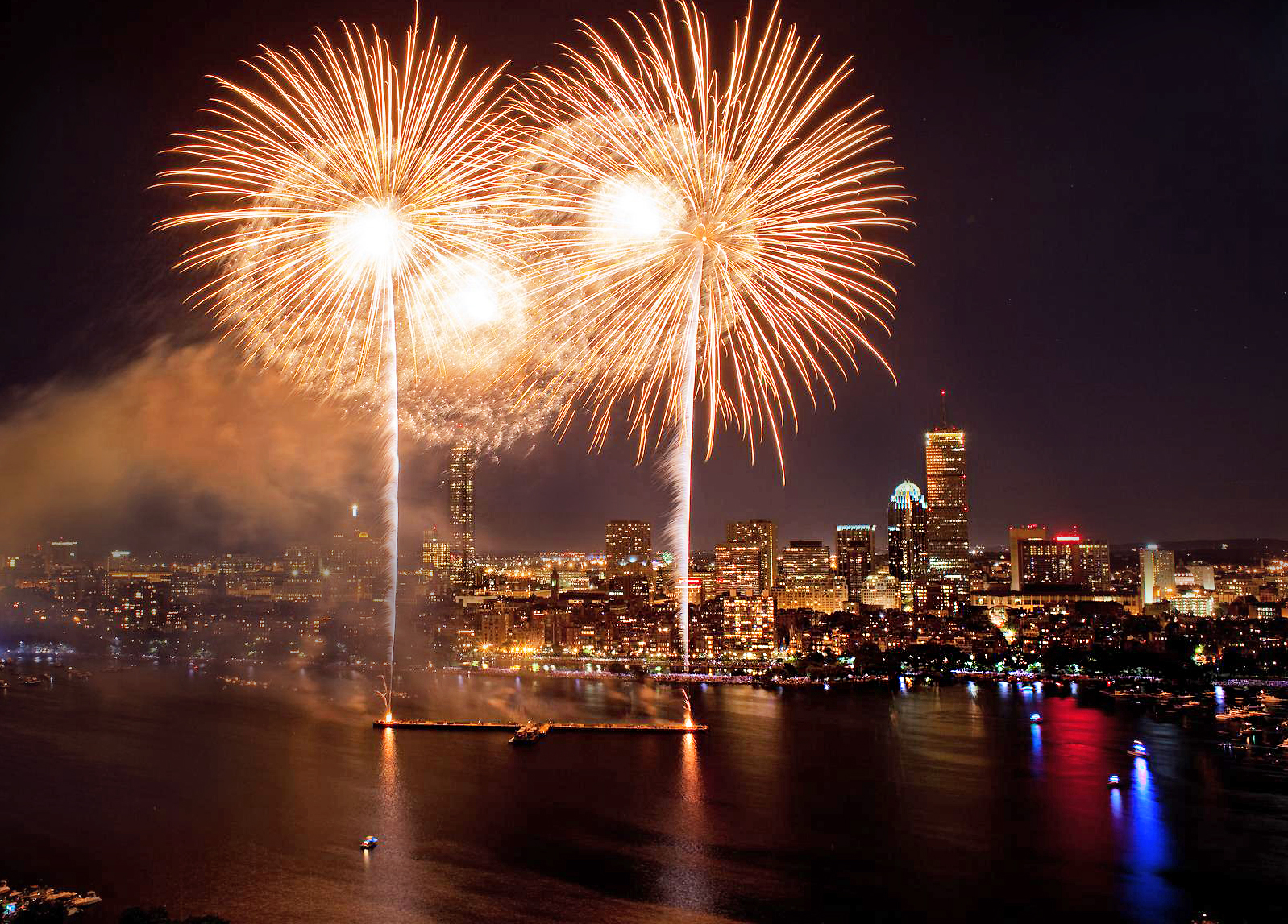 Above: The 4th of July fireworks show in Boston, Massachusetts takes place every independence day along the Charles River waterfront and viewing it by boat is one of the best ways to experience the event. Photo via Pond5.

We start our tour with perhaps the most quintessential 4th of July experience in historic Boston, Massachusetts. This city was the birthplace of Paul Revere and is home to the Freedom Trail and Faneuil Hall Marketplace, nicknamed “The Cradle of Liberty”. Being the site of several key events in the American Revolution, such as the Boston Tea Party, Boston is not only one of the most patriotic cities in the country, it’s also a major boating community. The Navy’s oldest commissioned warship, the USS Constitution, aka “Old Ironsides”, sits dockside at the Boston Navy Yard – one of the oldest shipbuilding facilities in the United States (and one of the first Navy shipyards ever). There you can see America’s Ship of State in all her glory as she makes her annual Fourth of July cruise in Boston Harbor.

If you’ve got a boat in this town, the thing to do is anchor in Boston Harbor or along the Charles River, where you’ll have an amazing vantage point to view one of the most famous fireworks shows in the country. This spectacle of pyrotechnics is launched directly from barges on the river and explode spectacularly above the skyline overhead.

Don’t forget to tune your boat’s sound system into the live broadcast of the annual waterfront concert at the Hatch Shell Auditorium on the nearby Esplanade. It’s a time-honored tradition for the Boston Symphony Orchestra to play the 1812 orchestra during the finale – probably one of the more awe-inspiring moments you can experience as a boater during the celebration of our nation’s independence. 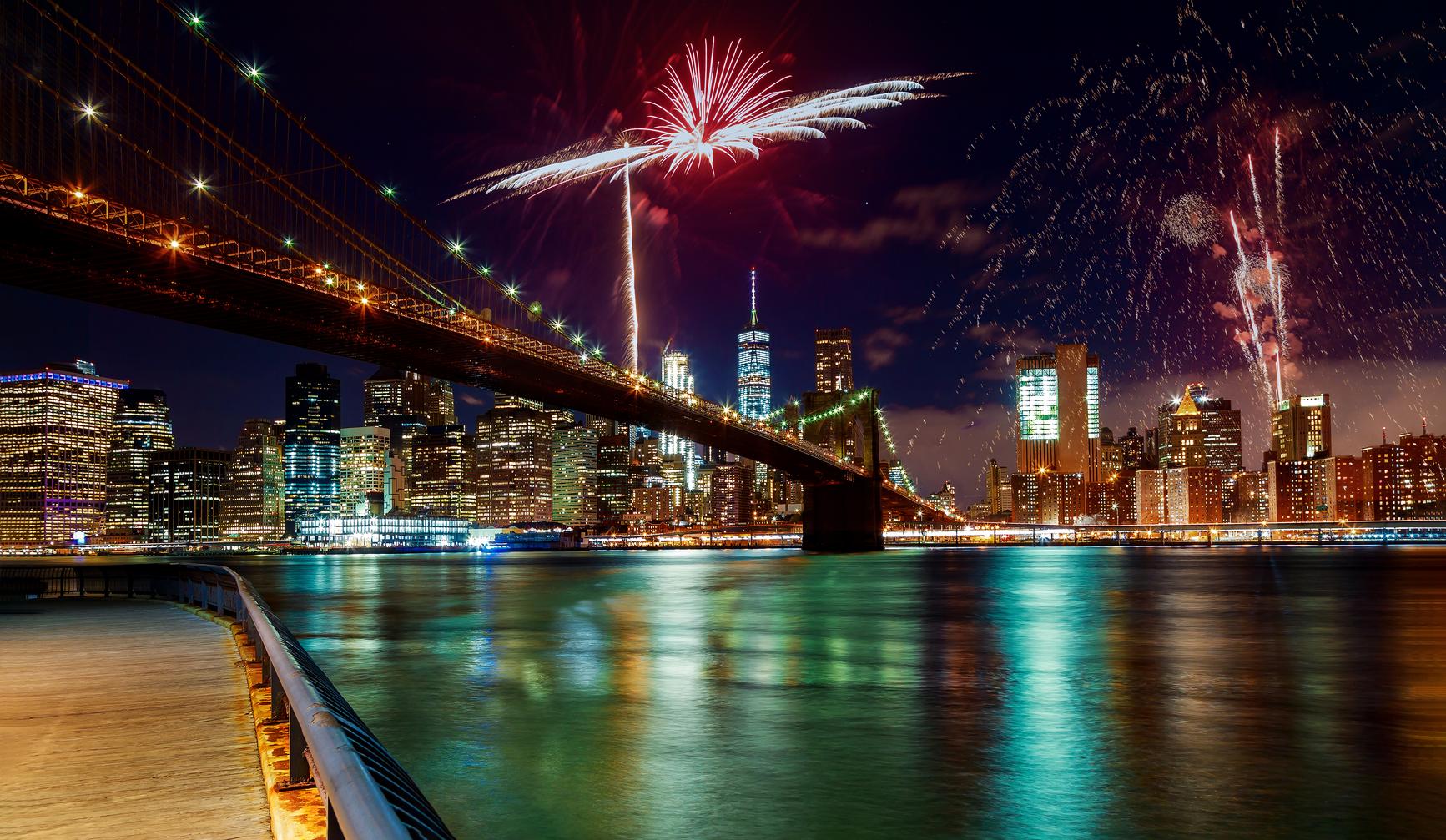 Above: The 4th of July fireworks show in New York City commemorating America Independence Day takes place in front of downtown Manhattan over the waterfront skyline. Photo via Pond5.

Leave it to the Big Apple to trump all other cities by throwing the biggest fireworks display in the U.S. for the 46th year in a row. As always, Macy’s will present America’s patriotic birthday celebration with dazzling lights, igniting the New York skyline with thundering, colorful explosions. This year’s theme will feature a classic American cinema film score and will be launched from the Brooklyn Bridge, as well as from barges along the lower East River. Millions of spectators will line the waterways to get a view of the one of the best 4th of July fireworks, complete with synchronized music.

Naturally there’s a lot of boat traffic on the Bay, the Hudson and East River, so boaters should be sure to arrive early. There are several designated anchorages near Liberty Island and around New York Bay, but they do fill up quite quickly. Then again, it may be worth fighting the crowds as there’s nothing more iconic than watching fireworks erupt over the Statue of Liberty from the water aboard your own vessel. Many choose to anchor overnight to avoid the mad dash back to marinas when the fireworks end.

Everyone knows Miami knows how to party – so it’s no surprise that the country’s best floating boat parties tend to be in South Florida. Two of the most popular boat party meetup destinations in Miami for the Fourth of July holiday are Haulover Sandbar and Virginia Key.

On Haulover Sandbar, hundreds of boats and yachts anchor for an afternoon of food, drinks, music and fun in the sun. Make sure you’ve got a good boat barbecue setup and you can spend the whole day on into the evening, when you’ll catch one of the best views of fireworks over Miami. If you’re paddling over, or hitching a ride on someone else’s boat, you can hit up the food boats – from shawarma to hot dogs there’s a wide variety of cuisine available, especially on the 4th of July. There are even Jumbotrons playing sports games and movies.

Above: Pack your cooler, the Bridgewater Channel on Lake Havasu in Arizona provides stunning views and a wild 4th of July experience. Photo by River Scene Magazine.

If you really want to get wild, head to Lake Havasu in Arizona where you won’t want to miss Bridgewater Channel – a half-mile stretch of waterway between London Bridge and Rotary Park. Famous for being featured on MTV’s spring break coverage not just once, but on multiple occasions, Lake Havasu isn’t for the faint of heart. Many people choose to rent a houseboat and use it as a headquarters on the water, securing the best viewing location of Thompson bay from their top deck.

For boaters who are looking for a wild July 4th party experience, this 43-sq. mile long body of water is one of the State’s most popular holiday recreational attractions with water temperatures ranging between 75-85 degrees.

Above: A panoramic view of Marina Del Rey in Los Angeles California. Photo by howcheng.

Near Venice Beach at Marina Del Rey you can either set sail into Santa Monica Bay for the evening, or snuggle up dockside under a blanket on deck to watch the sky burst into life, sparkling over the water below.

This is the world’s largest man-made small craft harbor and is home to 19 different marinas, with capacity for 5,300 boats and great waterfront restaurants and nightlife. The fireworks show goes on at 9PM and last 20 minutes, attracting several thousand visitors every year, so get your slip early! 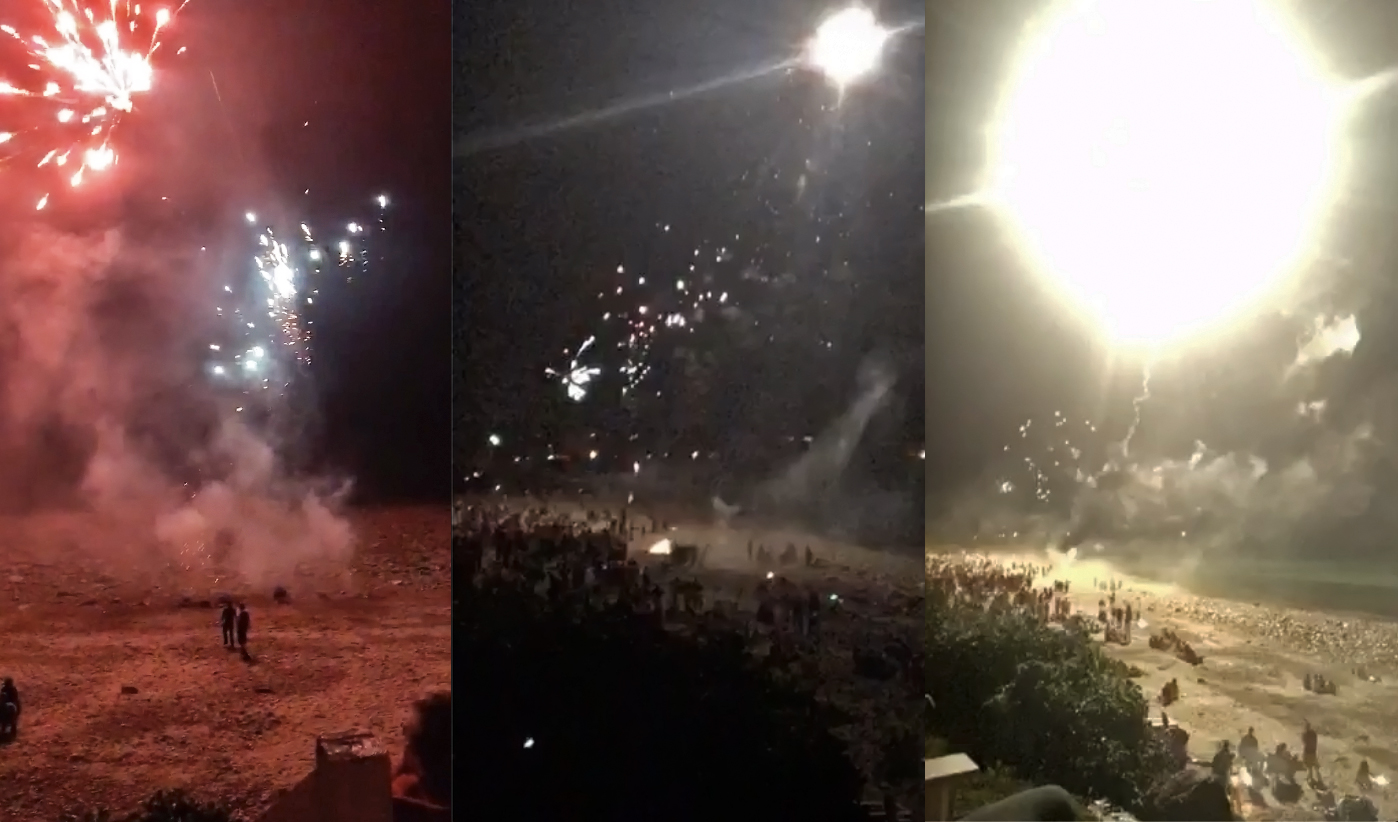 Above: The July 3rd Fireworks show in Plymouth MA on White Horse Beach is said to be the world’s largest amateur fireworks show. Photo: Boat Trader.

Known as “America’s Hometown” Plymouth, Massachusetts is where pilgrims from the Mayflower landed and built one of America’s first colonial settlements. Now a thriving boating community, fishing port and active tourist destination, Plymouth is an ideal place for boaters. But perhaps lesser-known is the annual July 3rd fireworks show – proclaimed by locals to be the world’s largest amateur fireworks show!

From White Horse Beach stretching four miles up to Manomet Beach, thousands of residents come out to launch their own pyrotechnics, many of whom design elaborate DIY fireworks launching setups and switchboards. During the rowdy beach celebration, hundreds of bonfires dot the beach as fireworks illuminate the sky above well into the night, just before the dawn of Independence Day. Boats anchor off the coast where those onboard have an amazing view of this unique, one-of-a-kind beach party.

7. Best in the Midwest: Chicago, IL 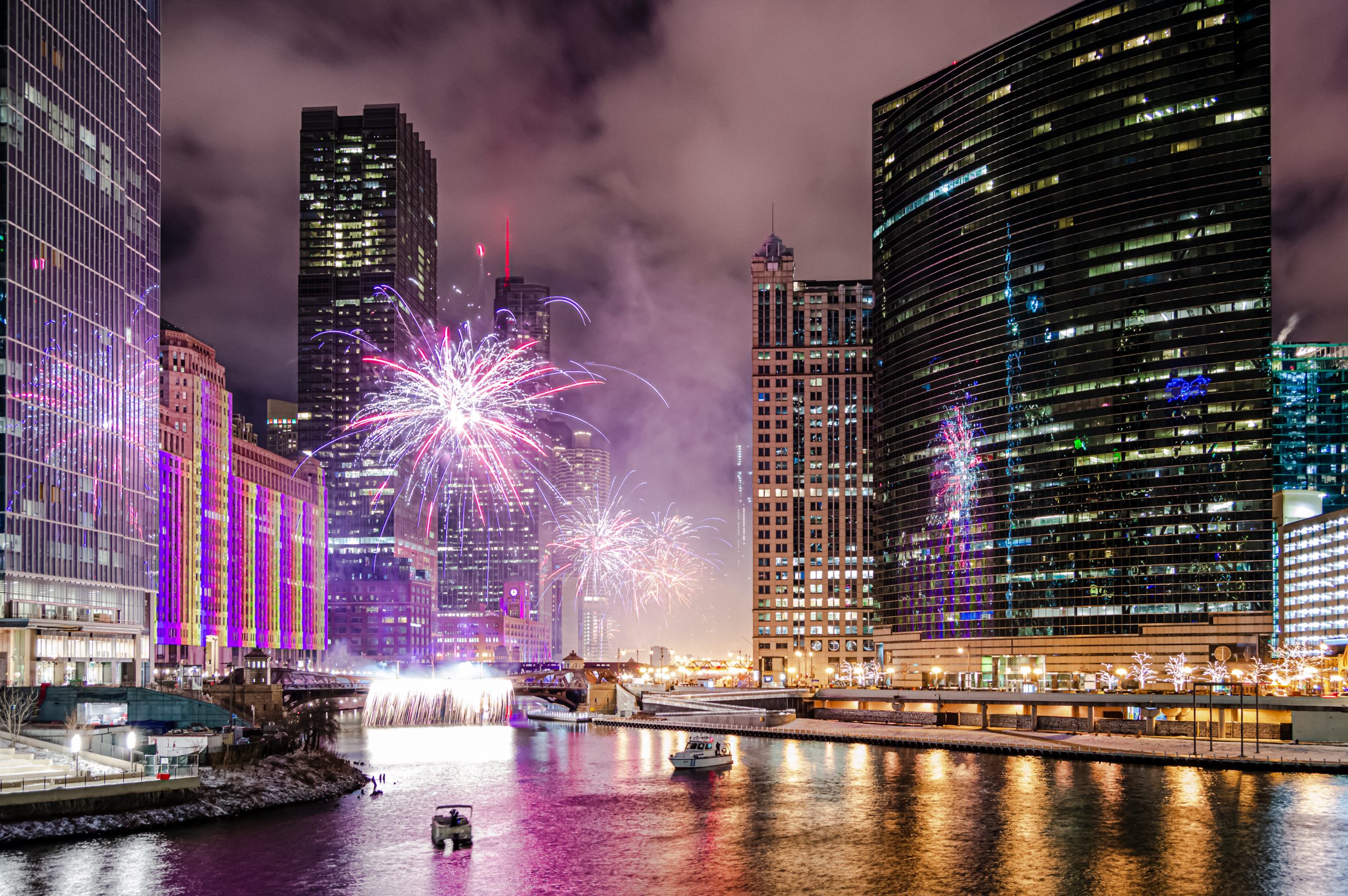 Above: The 2022 Chicago Fireworks display for Independence Day will be visible over the Chicago River at Wolf Point in Chicago, Illinois. Photo via Pond5.

If you’re in the Midwest and want to go big – head over to Chicago’s waterfront. Chicago always puts on an unforgettable show, with fireworks perfectly synchronized to music over Lake Michigan. The Chicago waterfront consists of 10 beautiful harbors along the city’s 14-mile lakeshore, and together they constitute the nation’s largest municipal harbor system. With spaces for over 6,000 boats and a Summer occupancy rate of over 95% these marinas are some of the busiest in the country during the 4th of July. This means it’s important to call ahead and reserve your slip or mooring early – or just trailer your boat down and anchor out in Lake Michigan for an equally spectacular vantage point. 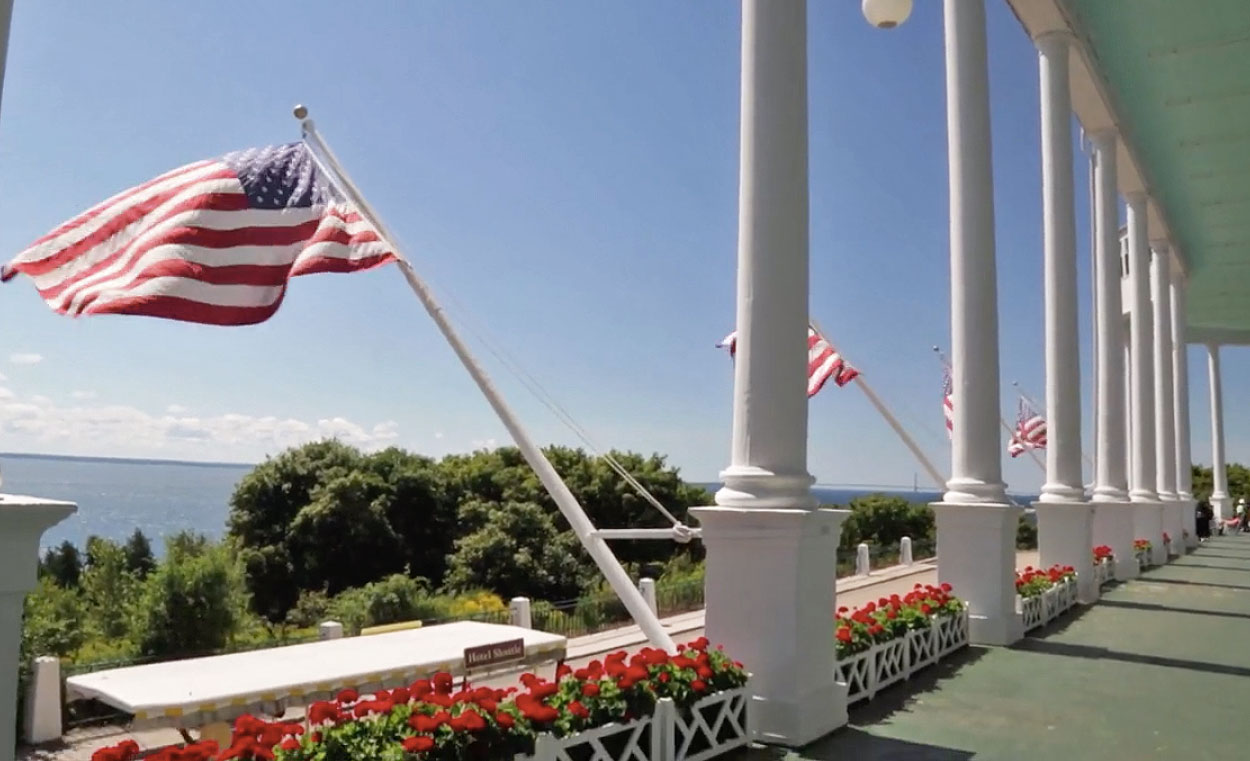 Above: The view from The Grand Hotel on Mackinac Island on the 4th of July. Photo by C. Ryan McVinney.

If you’re in the central Upper Great Lakes region, you can take your boat over to Mackinac Island, tie up at the marina and go back in time at what is often called the Jewel of the Great Lakes. In this historic town, no cars and no chain hotels are allowed. The only way to get around is by boat, on foot, bike or horseback – and the streets are literally littered with hundreds of horse-drawn carriages. The island provides unforgettable sunsets, awe-inspiring sunrises, quaint marinas and extraordinary nightlife. July 4th fireworks begin at dusk along the West side of the island, near the boardwalk and Windermere Point.

Above: A Lobster Bake on Pond Island Preserve on the Maine Coast is a local tradition around the 4th of July. Photo by C. Ryan McVinney.

Maine is known for its serene, natural beauty, rugged coastline and picturesque waterways. Known the world over for its historic fishing towns and amazing seafood, nearly 40 Million tourists flock to Maine every year to taste the freshest lobster and clams and explore the coastline by boat. It’s also an ideal place to spend your 4th of July holiday on the water, especially if you’re looking to travel off the beaten path a little!

One of the more undiscovered local traditions is to anchor off many of the coastal islands around Castine or Camden, such as Pond Island Preserve, and paddle in for a lobster bake on these remote beaches. You may have to bring your own entertainment, but it’s a great way to get away from it all and enjoy some peaceful time with your friends and family in a natural setting. The biggest holiday display is the fireworks in Portland Maine, where boaters anchor off the many islands in and around Casco Bay to catch a glimpse of night time display. 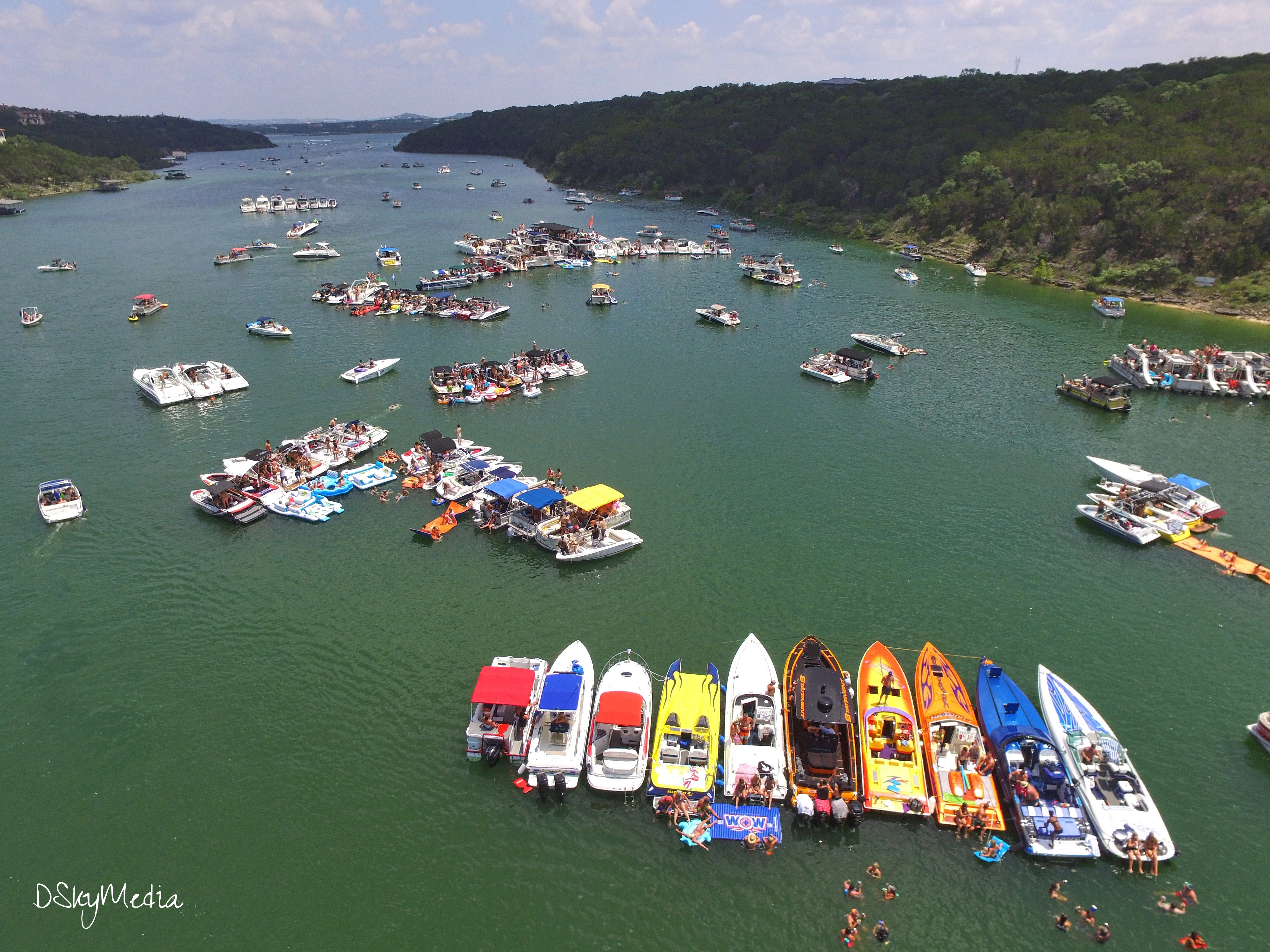 Above: They say everything’s bigger in Texas—and that includes the 4th of July parties at Devil’s Cove on Lake Travis. Photo Courtesy: DSkyMedia via Reddit.

Starnes Island on Lake Travis near Austin hosts a huge, annual Independence Day boat party and fireworks show, with over 1,000 boats in the water surrounding the island. Here the boats anchored off the shore illuminate the night water with gleaming lights, creating a romantic atmosphere beneath the stars in the big Texas sky. It’s a wonderful way to spend the July 4th holiday.

Of course there are many places to spend your 4th of July on a boat that we haven’t covered here. Some notable cities not included on this list that also offer great destinations for boaters on the 4th of July are: San Diego, Seattle, Washington D.C., Atlantic City, Virginia Beach, New Orleans, Detroit and Philadelphia, just to name a few. Every city and town celebrates in their own way. Check out our other articles on the best places to view fireworks by boat in the country – and wherever you are, stay safe out there.

Editor’s Note: This article was originally published in July 2019 and was last updated in June 2022.