Boats are being asked to do so much these days. Because most families have multiple interests but the budget for only one vessel, boats need to be able to fish, tow, cruise and entertain all in one outing. If they can do all this in an attractive and affordable platform under 25 feet, that’s doubly impressive. Four Winns, which is now owned by French boat builder Beneteau, has just launched the new H4, and at 23’ 11” it does an amazing job of just about everything. 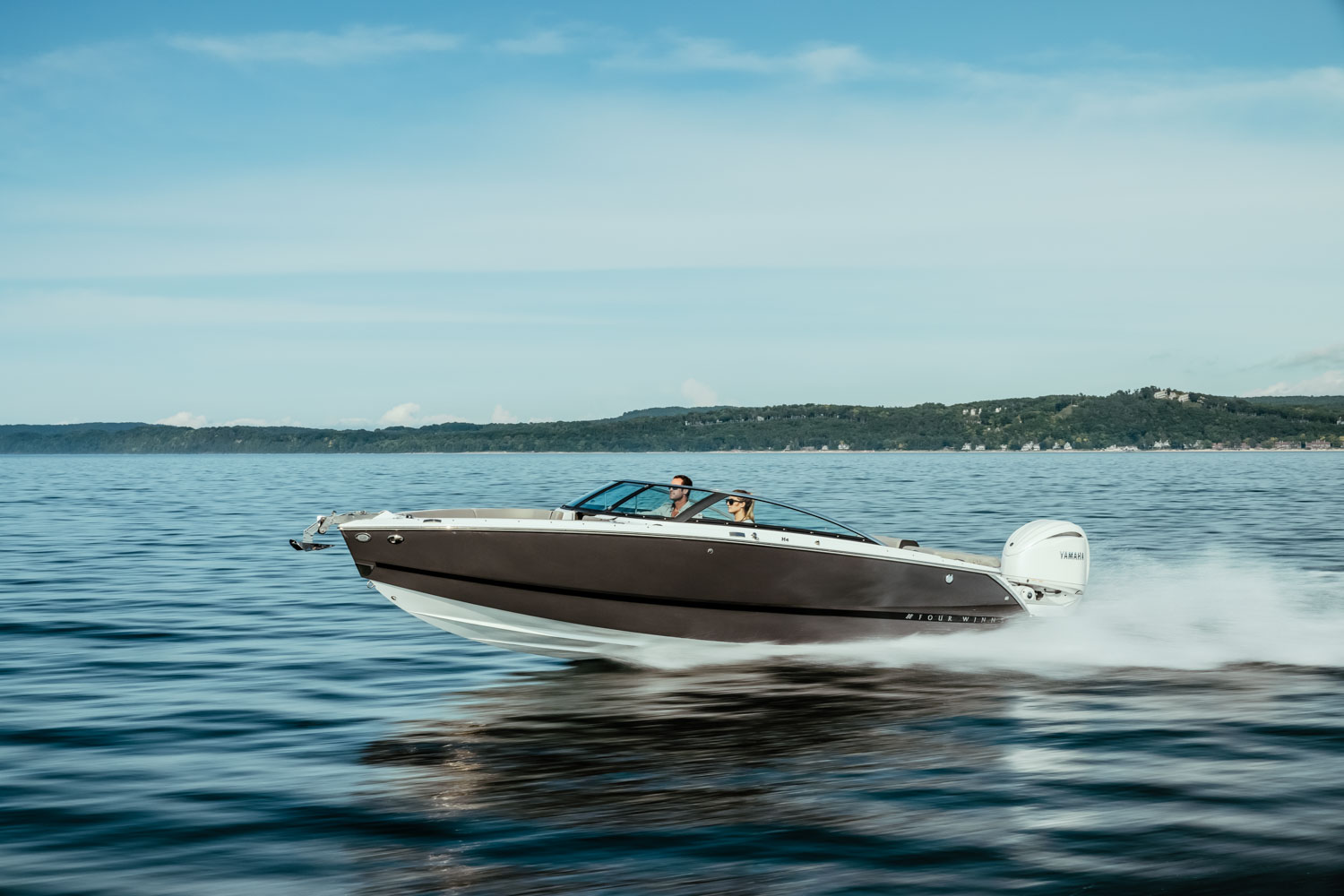 Above: A 2022 Four Winns H4 bowrider boat on the water running. Photo by Four Winns.

The overall aesthetic makes you think of speed There’s a low curved windshield, an open bow and an extended platform all of which come together well. The social aspects of this boat are well-developed with a large U-shaped settee that takes up most of the cockpit. Nice touches include two carry-on Igloo coolers and a trash bin all hidden below the bench seats. Ahead are twin bucket seats, each with a bolster. They swivel to face the settee when it’s time to socialize and a table can be mounted into a bracket on the portside for entertaining. Above: An overhead view of the 2022 Four Winns H4 Bowrider boat showing the deck layout with the optional wakeboard tower. Photo by Four Winns via Intermarine in Fort Lauderdale, FL.

Below the sole, there’s large stowage where to keep water toys, tow ropes, boards and lifejackets. A secure glovebox is ahead of the companion seat for small items like car keys or wallets. The finish is mostly single-color faux leather although there are small accents in a secondary color and lots of intricate stitching and embossed patterns that add a touch of luxury.

Aft is a sunpad that many will fight over because it’s the premium lounge space aboard. The outboard ends lift to form headrests or they can flip all the way over to clear a path on either side so you can go onto the swim platform without stepping on the upholstery. There are also rod holders integrated into the gunnel back here so you can fish in the morning and waterski in the afternoon. 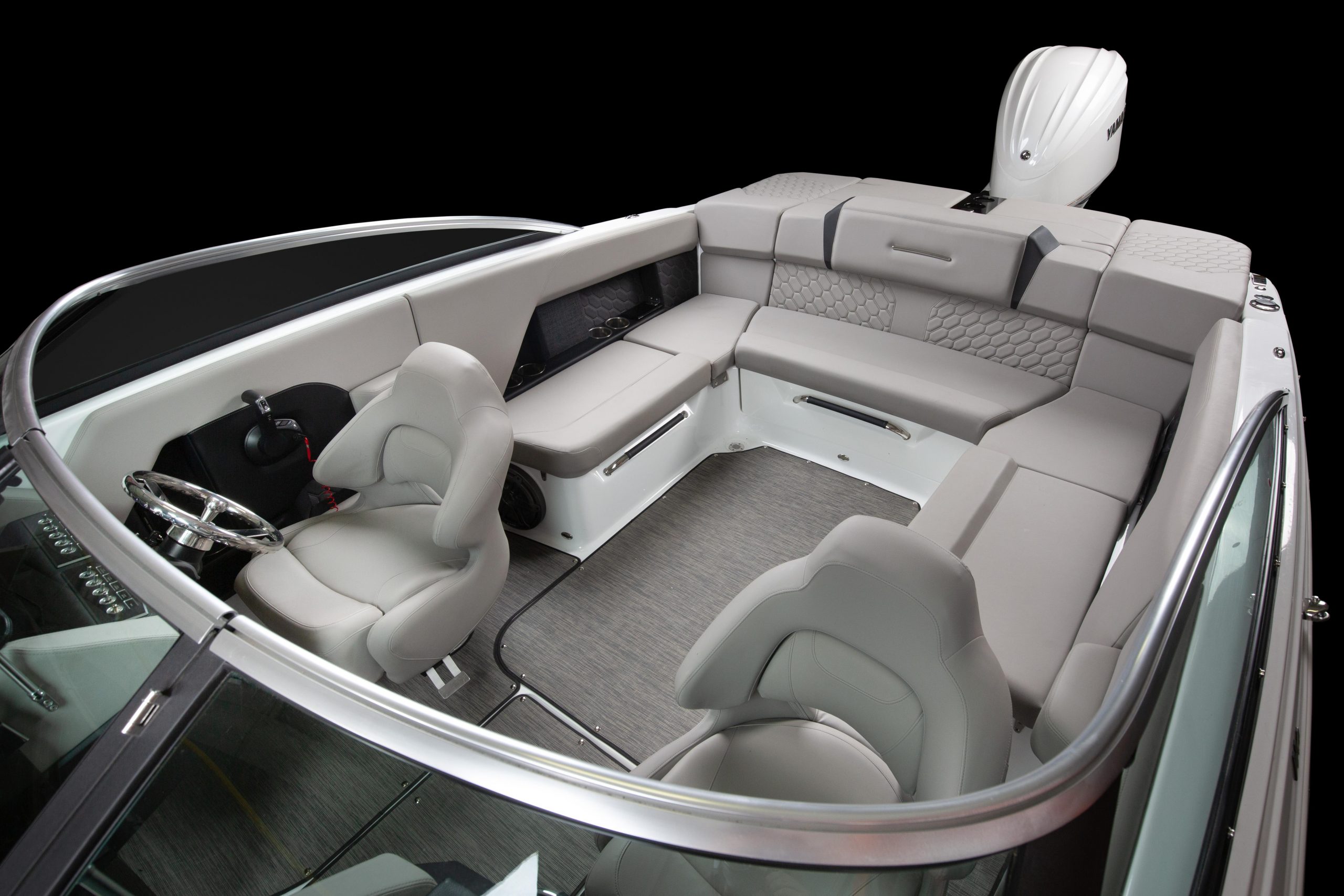 This swim step (which also has an integrated ladder on an angle on the starboard side) is a great place to sit and put on your waterski or just dunk your toes and watch the kids play in the water. There’s even an optional pull-out shower to rinse off when you’re done swimming.

The H4 is offered with either stern drive or outboard propulsion and the choice makes a difference in the aft part of the boat. Of course with the stern drive version, you’ll have much clearer access to the water and an open swim platform of the stern.

With the outboard engine mounted on the transom instead, your propulsion is out of the hull and well aft of the boat, dividing the platform into two sections port and starboard. This creates a cavernous space in cockpit where the inboard engine would normally go. It can be put to good use as large stowage area or – and here’s the big reveal – you can add the optional plumbed head by Dometic and a pop-up curtain that also serves as a changing area. It’s definitely an unexpected feature and nearly impossible to find on a boat in this class. Another nice touch to this feature is the powered hydraulic lift to raise and lower the sunpad. 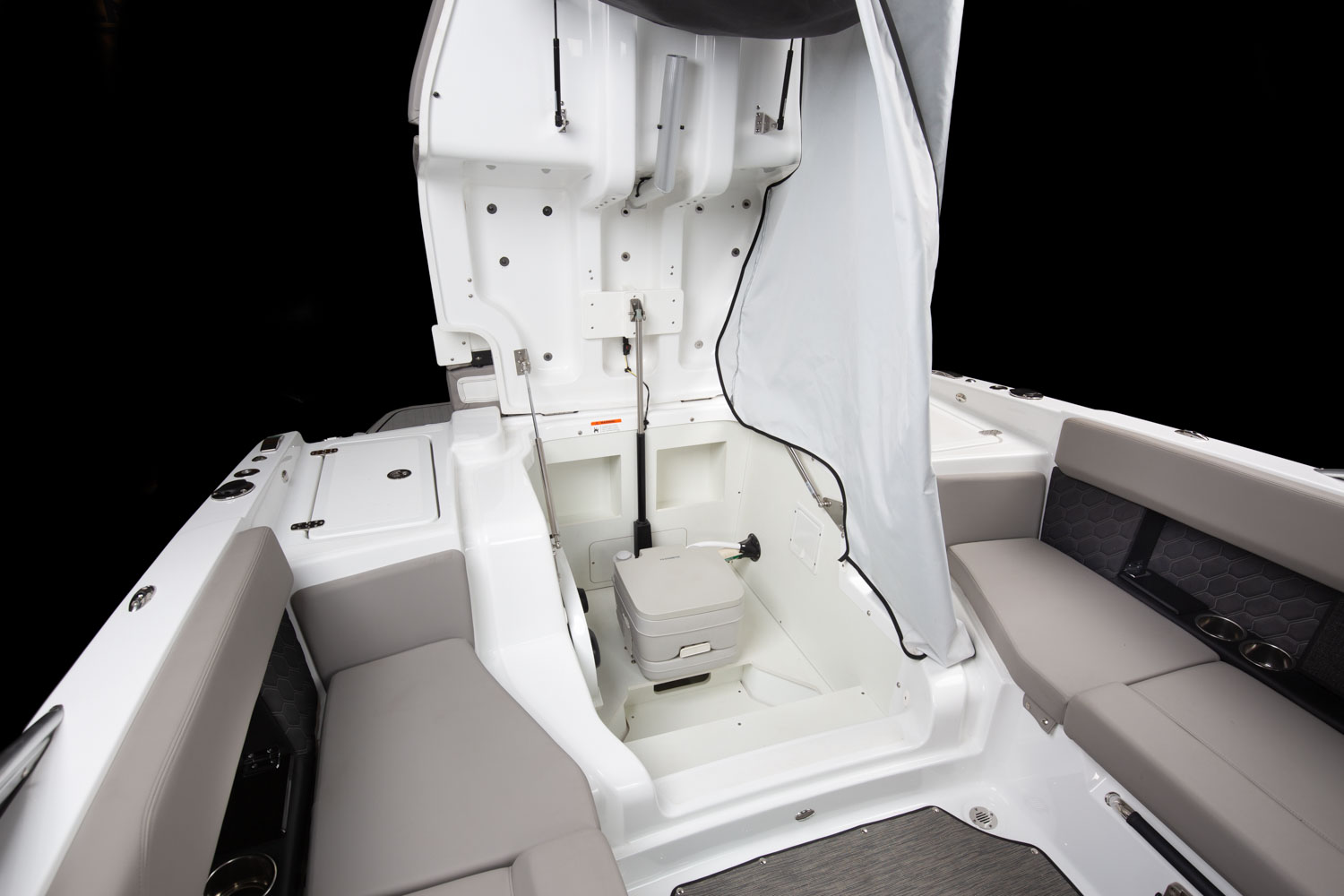 Above: The pop-up head compartment with a Dometic marine toilet and privacy curtain on the 2022 Four Winns H4 bowrider boat. Photo by Four Winns via Intermarine in Fort Lauderdale, FL.

Standard outboard power on the Four Winns H4 is a 250HP Yamaha, with an optional 300-HP Yamaha, the max horsepower for this vessel offering plenty of push when needed.

The bow is separated from the cockpit by an opening section in the windshield as well as a plexiglass gate. Close both to cut spray when driving into the wind at speed. Two can lounge in the open bow in seats that are 17-inches deep so they feel secure although there are handholds on either side if you’re being jostled on rough water. Four can gather here for happy hour around that removable table that can be transferred from the cockpit. Ahead is an anchor locker with an optional electric windlass which is quite a posh feature on a 24-footer. 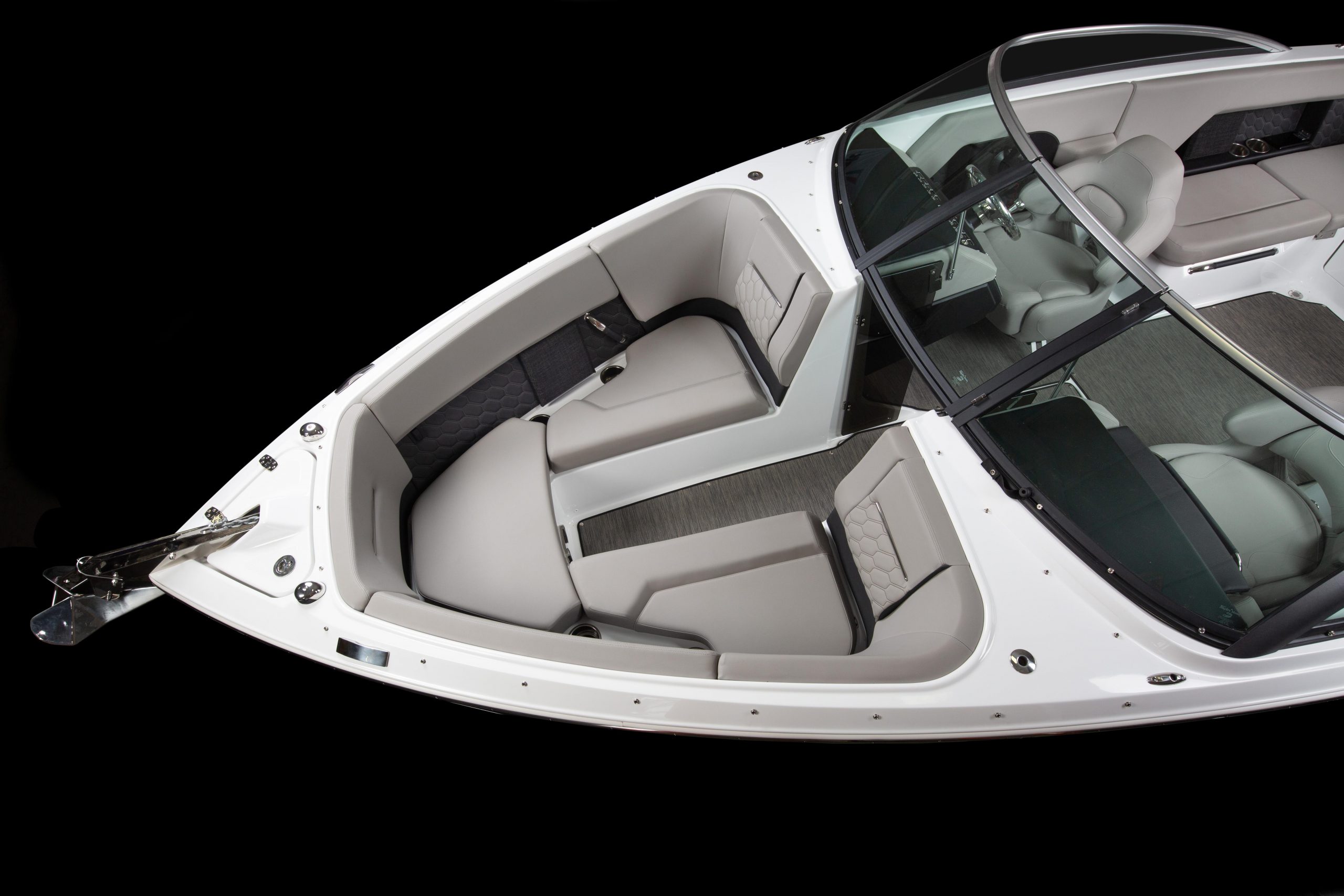 Above: The bow are layout on the 2022 Four Winns H4 runabout bowrider boat. Photo by Four Winns Boats via Intermarine in Fort Lauderdale, FL.

I counted 16 cupholders which must baffle the French who don’t understand Americans’ obsession with beverages. The H4 is rated for a maximum capacity of 11. That may feel a little crowded but eight will certainly be comfortable and that leaves two cupholders per person. Nearby are inductive chargers for cell phones as well as numerous USB ports so you can Instagram your whole day and never have a low phone battery.

We took the H4 out in Miami on a day when most boats would have stayed in. The seas were sloppy with a three-foot chop and steep messy wakes from bigger boats all around. It was blowing 20 knots, so it was far from mellow lake or bay conditions. Captain Sarah welcomed us aboard and we tugged on various lines to release ourselves safely in the four-knot current that was running through the marina.

Our test boat was equipped with the upgraded 300-HP V6 4.2L Yamaha engine. A 200-HP outboard is standard and Mercury also an option. The 52-gallon fuel tank was about half full and we had 3 people aboard. We reached a top speed of 51 mph burning 22.2 gph. This felt entirely too fast for the feisty conditions, so we dialed it back to a 22-25 mph cruise where we burned 7.5 gph. The steering was precise with solid turns and the bow stayed low even as we came out of the hole.

Four Winns’ Stable-Vee hull has an 18-degree deadrise at the transom which is shallower than the Horizon 230 model which it replaces. It took the choppy waters in stride and had us up on plane in four seconds with a quick adjustment of the Lenco trim tabs. Four Winns says the vessel can hop on plane around 15 knots and has a max speed of 56-57 MPH with the 300-HP. 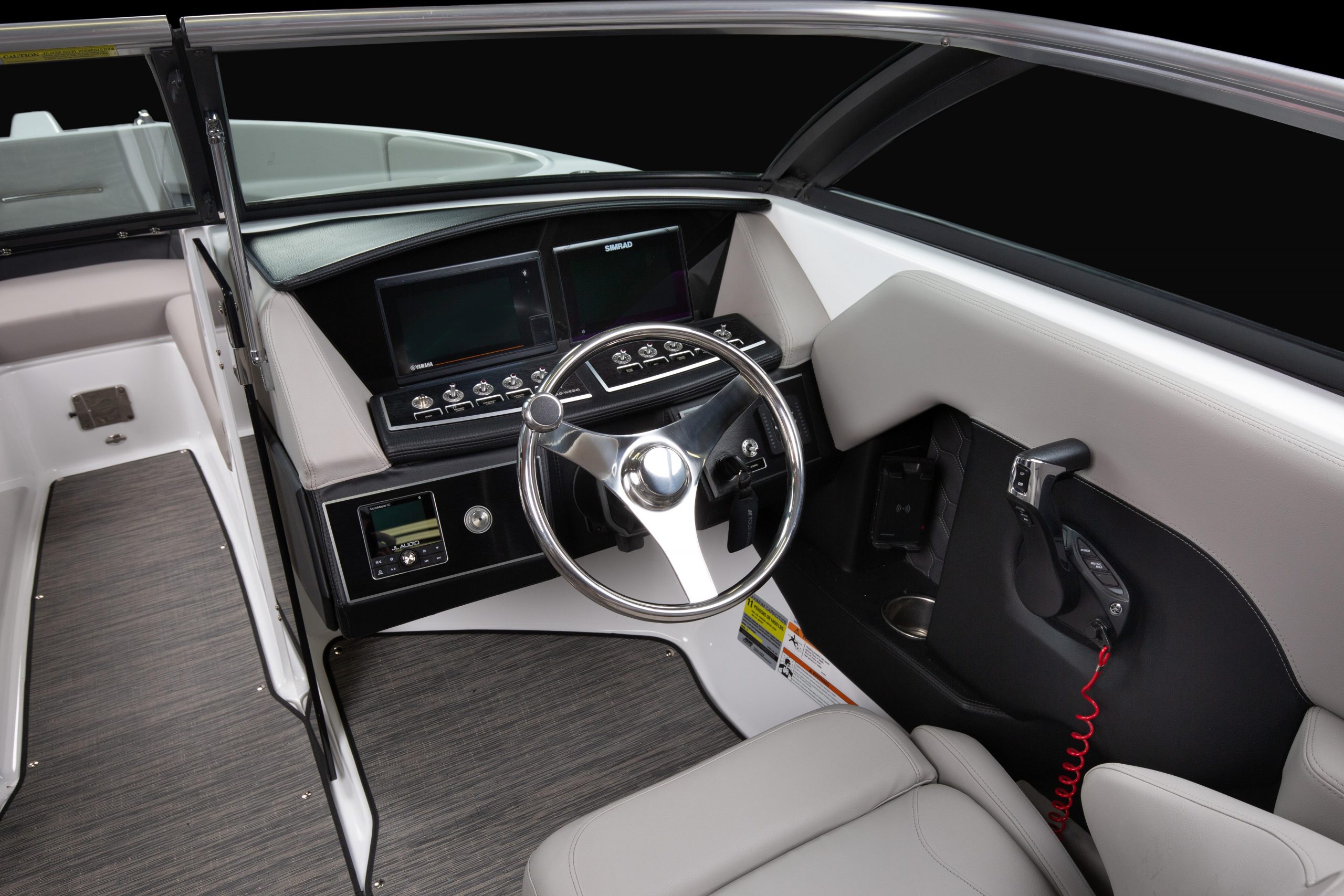 Above: The helm controls and dashboard on the 2022 Four Winns H4 runabout bowrider boat. Photo by Four Winns Boats via Intermarine in Fort Lauderdale, FL.

At the helm, there’s a GO7XS touchscreen Simrad multifunction display and you can add another for $1,400 so you have all instrumentation and navigation information at your fingertips. The throttle is outboard and has an integrated ECOS (engine cut-of switch) for safety. For convenience, there’s also an onboard cord that can be plugged into any 120V plug to charge the batteries whether the boat is at a dock or on a trailer.

You can make the H4 anything you want. With rod holders, a ski pylon, a sunpad and deep lounges, there’s really nothing this boat can’t do. More importantly, it comes at a price that won’t break the bank. The base price is $105,000 and that includes the (color-matched) trailer so your boating grounds are limited only by highway access (and a ¾-ton tow vehicle).

There are lots of ways to upmarket the H4 including pop-up cleats, underwater lights, an upgraded JL audio system, SeaDek flooring, and a tower where to add board racks, lights and speakers. As tested, expect to pay $130,000. The H4 is a lot of boat in one tidy and good-looking package that’s not limited to inland waterways, so if you’re in the market for a family runabout that can do everything, take a first and second look at this model.