A rather harsh reality, some depressing NASA data, and in the “Not your normal subway buskers” department… 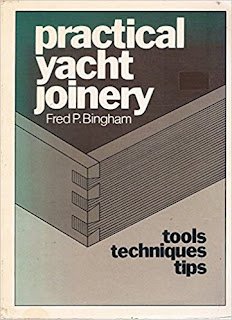 Face it, when you think about it, just about all boat interior joinery is just building boxes.

Boxes are pretty simple to make and if you can’t build a box you’re in some serious tyro territory.

Sure you can make them a bit more complicated (dovetail joints for instance) but with modern adhesives that’s more of an aesthetic decision rather than a needful one.

Back when I was doing interiors on the Bruce Bingham Flicka design the interior assembly took three days. Add another couple of days to make the interior kit and we’re talking a week of labor.

I expect that if you hired a guy to do about the same amount of work in your kitchen at home you’d think a week would be excessive.

For home builders, as opposed to folks who cobble boats for a paycheck, the amount of time things take seems to adapt to the amount of time available. While a production worker can build a nav-table and surrounding shelves and suchlike in a day, the home builder can take months or even longer to build what is essentially just a few boxes. Add an inset compass rose to the table and it can take years.

Sure there are any number of tricks one can use to make building boat interiors easier as well as less expensive. In my case I let Fred Bingham do most of my thinking for me as I’ve never come across a problem that “Practical Yacht Joinery” did not have an answer for.

But, I can hear you saying…

“Boats have curves and shapes that make it nearly impossible to make boat furniture!”

…and yes dear reader you’d be right that boats have shapes that confound even the most bespoke carpenters square. Luckily for us there are inexpensive tools available that make even the most audacious compound curves fast and easy to deal with.

Having the right tools is a big help but, the truth is the real game changer is getting to know just how much labor goes into making that drawer or similar contrivance and adapting your work habits to exclude time spent on other stuff.