Given their infamously chilly winters, you might think that midwesterners are annually forced ashore come the colder months. However, subfreezing temperatures in Wisconsin are no match for Geneva Lake’s most determined sailors. In fact, for the area’s iceboaters, the freeze couldn’t come soon enough. 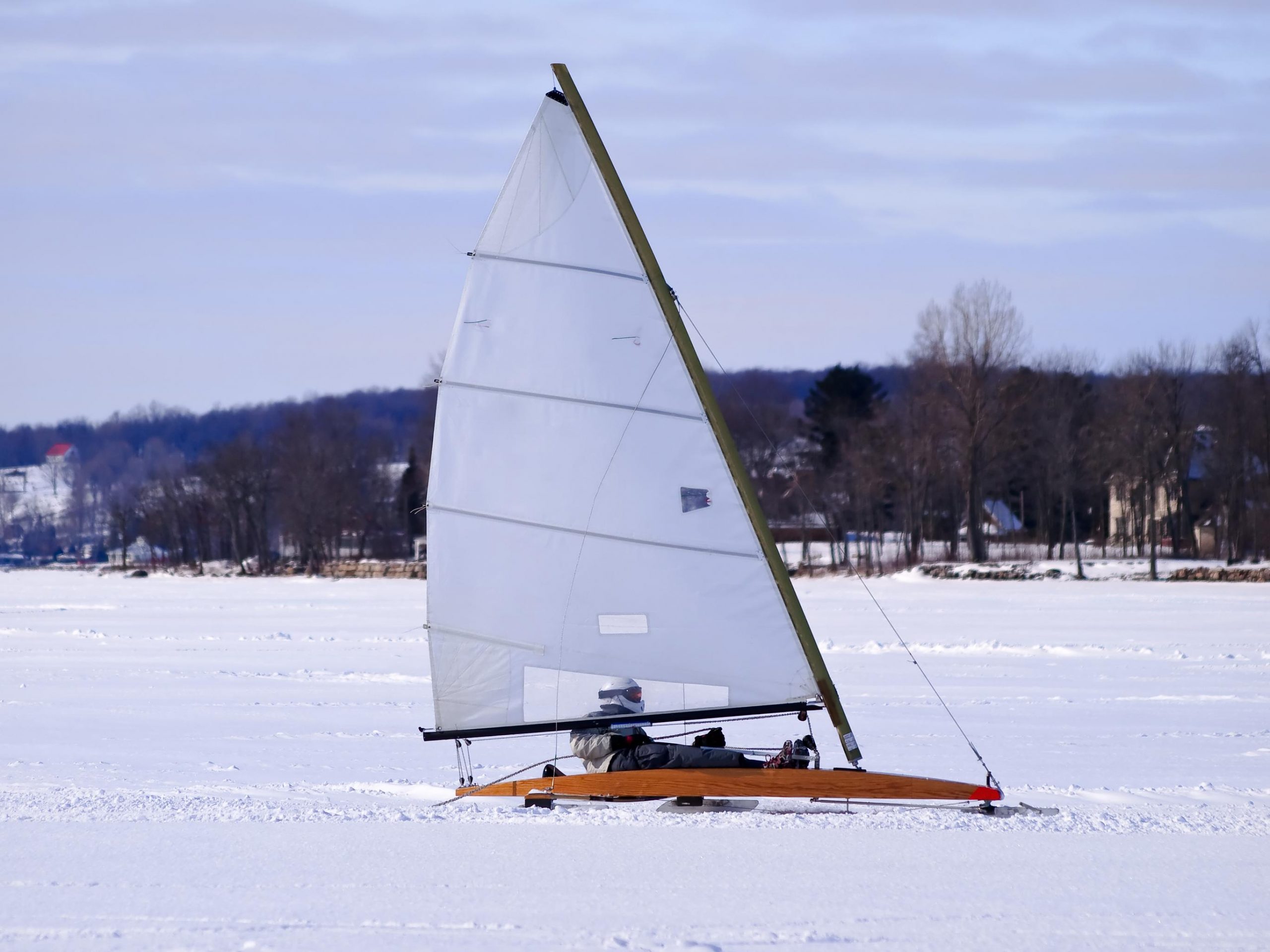 Above: A man sails along the ice in an ice boat. Photo via Pond5.

Known locally as “Skeeter Season” (after the style of ice yachts that were developed in the region) the winter months bring state-of-the-art sailing competitions annually. Skeeters are essentially akin to the “Formula One” boats of ice yachting. They are sleek, aerodynamic speed demons constructed of kevlar and carbon fiber to fly over the ice at high speeds.

Of the more than 15,000 inland lakes dotted throughout Wisconsin, few are more beloved than Geneva Lake. The 5,401-acre body of water is shaped vaguely like a dolphin on its way westward from Lake Michigan. Balanced on its nose is the city of Fontana. Seven miles due northeast, the city of Lake Geneva trails from the tip of its tail. And between the two, Williams Bay makes up the dorsal fin. If the lake, 144’ at its deepest point, were poured out evenly across Chicago’s 234 square miles, the water would come up to about knee-high. But it is for the proximity of Geneva Lake’s clear waters – rather than the threat of flooding – that has endeared it to the Windy City’s residents for weekend getaways and summer sojourns since the late 19th century. 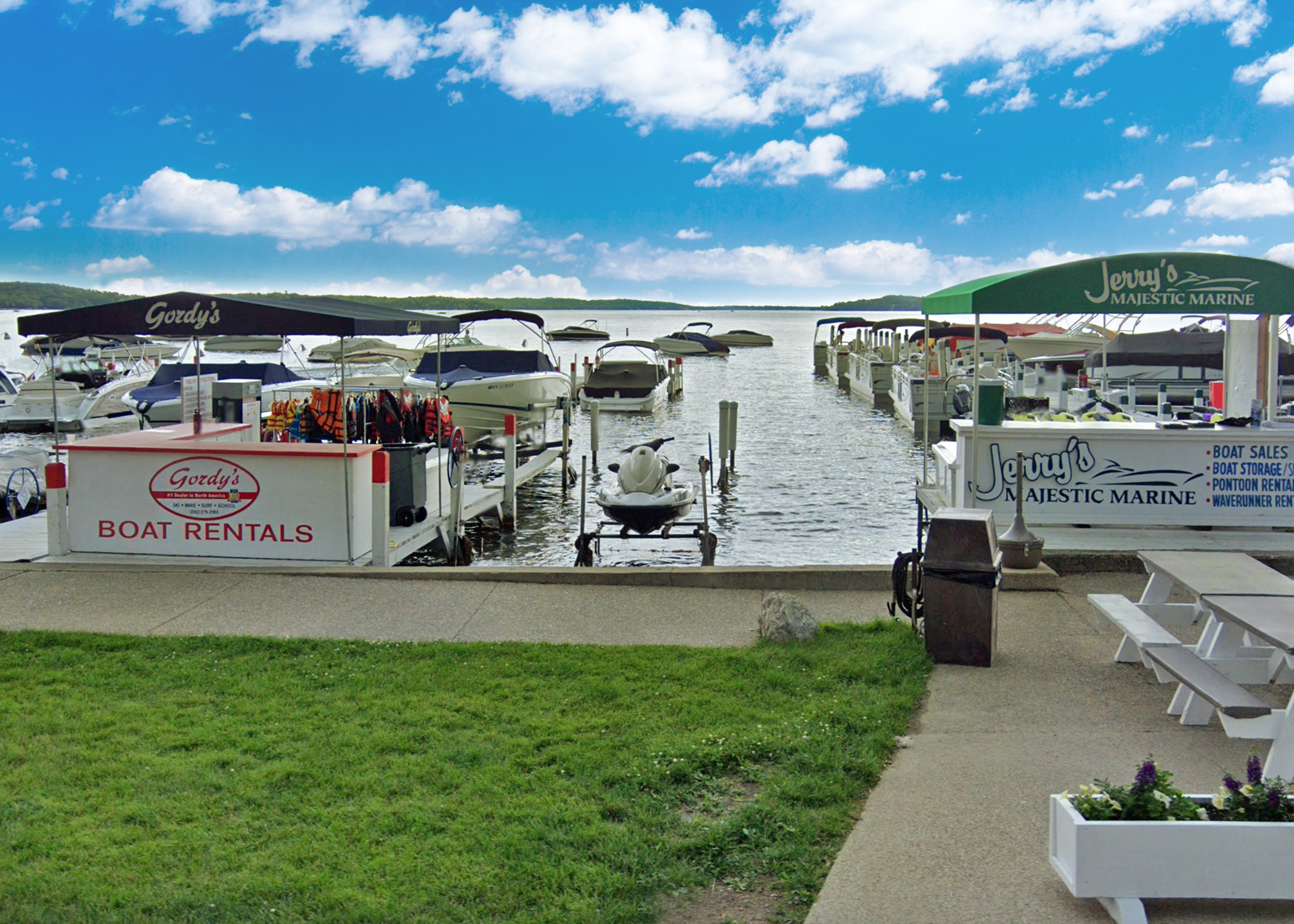 Above: Summertime at Gordy’s Pro Shop boat rental stand and Jerry’s Majestic marine in Fontana-On-Geneva-Lake along the shore of Lake Geneva in southeastern Wisconsin. A very different scene than the winter months. Photo by Boat Trader.

Summering in the belly of the beast – which is to say along Geneva Lake’s cetacean southern shore – I got to see how the weekend flow of powerboats speeding from one end of the lake to the other would be reduced to a slow trickle come Monday morning. But I was always amazed by how, every year shortly after Labor Day, the white piers would be pulled ashore and the surface of the water would be rendered mirrorlike – disrupted only occasionally by a determined fisherman on their way to land the last walleye of the season. 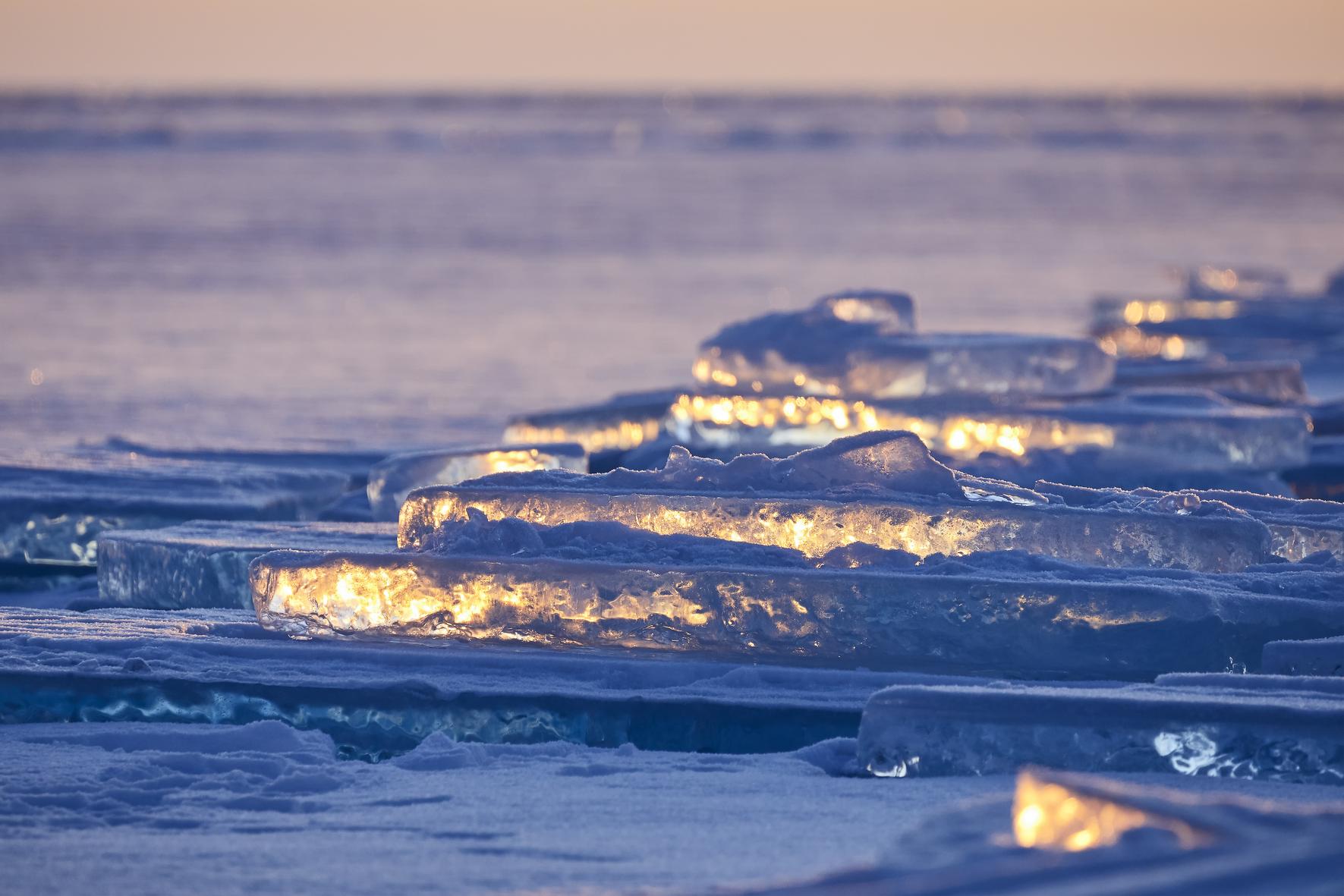 Above: Geneva Lake freezes over and enables iceboating season to begin. Photo via Pond5.

This desolation is only short-lived. As is the case in most places, anglers bookend the season. When the water freezes solid in December and January, where the wake from open bow cruisers once churned, ice fishing huts are erected. Then, as the ice becomes thicker, snowmobiles begin to venture out. Come February, it’s not unusual to see winter activity enthusiasts begin leaving their cars parked out on the lake despite the stories of people going to get coffee and returning to find their people carrier replaced with a large hole. But, even more so than watching SUV’s get dredged up, iceboating is one of the lake’s most exciting spectacles. 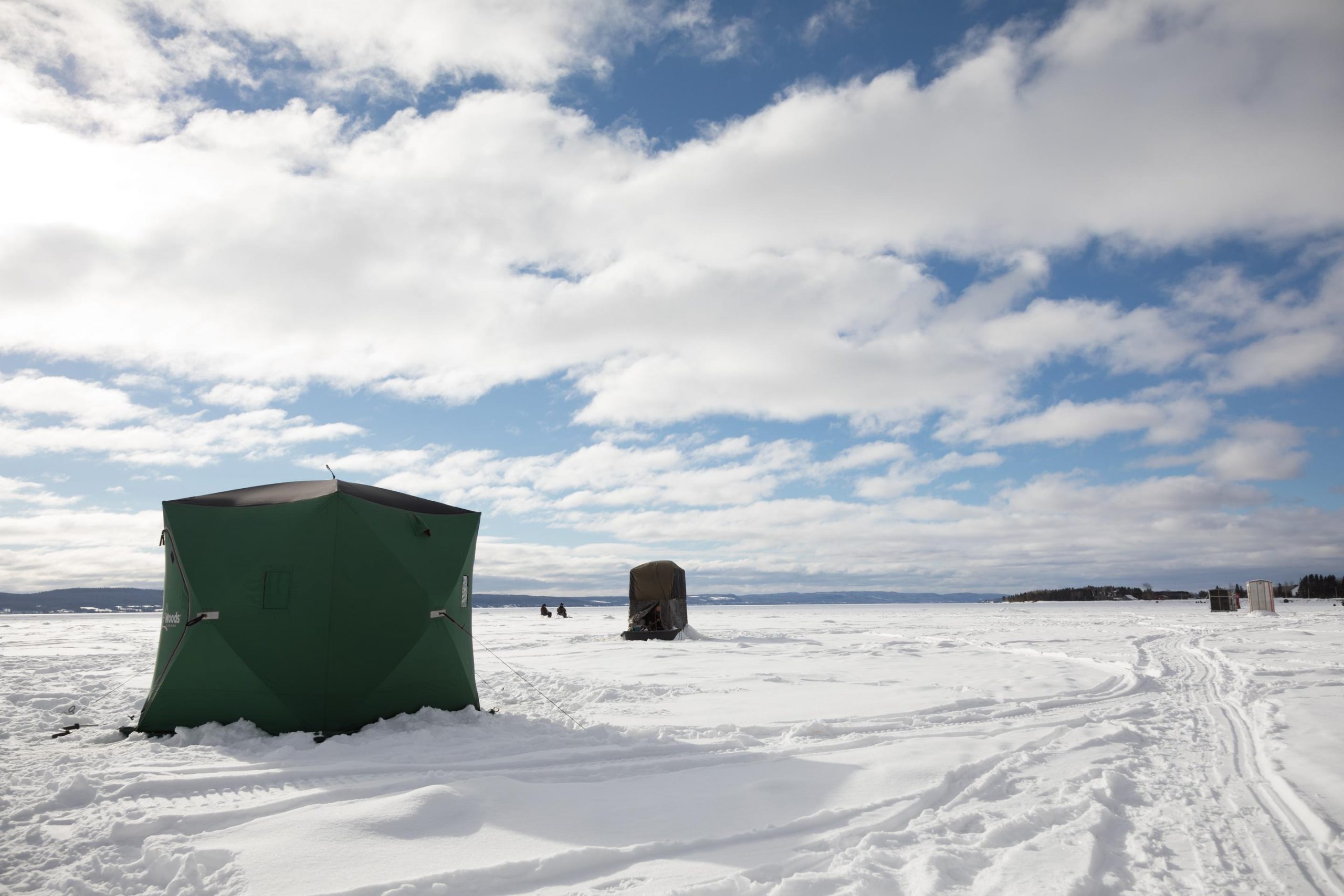 Iceboating is by no means a concession, especially for speed-enthused sailors. In 1938 on Lake Winnebago (just 50 miles north of Geneva Lake) an iceboat allegedly clocked in at a record-setting 143 mph. While there has been some controversy over that figure, 50+ mph runs are commonplace so it’s fair to say that the sport lends itself to plenty of high-octane excitement.

To those familiar with the anatomy of a conventional dinghy, an iceboat will seem pretty familiar above the mast step: mainsail, halyard, boom, side stays, etcetera. But things get a little quirky as you move downwards. The hull of an iceboat could be justifiably called a fuselage. They’re usually long and narrow, with just enough beam for a single sailor laid out straight like a luger. With the exception of Stern Steerers, an iceboat’s tiller points aftward and is located between the sailor and the bow. Below the hull, there are three metal runners – essentially beefed-up ice skates. Two of them are held on boards extending out from either side of the hull. The third runner steers the boat and sits along the centerline of the hull, either fore or aft depending on the design.

The Skeeter class iceboats common to Geneva Lake have their steering skate in the front. But the backward tiller is just the tip of the iceberg when it comes to learning how to pilot a Skeeter. Ice boats are fast and the Skeeter is the quickest among them. They travel three to four times faster than their soft water counterparts (given comparable wind conditions and sail area) thanks to the lack of water resistance. Along with nerves of steel, Skeeter skippers also have to have a quick draw on the main sheet. Capsizes happen a lot more suddenly and, without any waves to read, puffs can sneak up unexpectedly. But those that aren’t driven away by the prospect of crashing into solid ice at highway speeds, swear by the sport. Above: Iceboats sailing on the ice at sunrise. Photo via Pond5.

Geneva Lake is the ultimate iceboating venue in more ways than one. Because the Lake is so deep, it freezes a lot later in the season than Lake Como to the north. Even more so than their fair-weather brethren, the worst thing for an iceboat is putting it in the water. Along with their impressive performance, Skeeters are the ideal design for South Eastern Wisconsin by virtue of their portability. Sailors can pack up their boats and head out to LG as soon as they find out the ice and wind conditions are ideal. For that reason, the regattas do tend to be a little bit impromptu. That being said, it’s not uncommon to see a few dozen Skeeters swarming around Geneva Lake’s eastern shore. So this winter, if you’re tired of sitting in your garage and staring wistfully at your boat, why not bundle up and watch a regatta or give the sport a try yourself – just don’t park on the ice!

Editor’s Note: This article was originally published in February 2022 and last updated in January 2023.