A sobering point, some steps in the right direction, and the Antarctic heat wave continues… 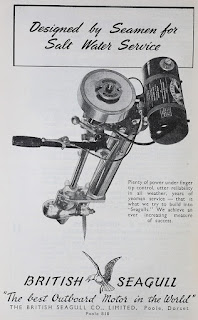 I just saw a 2.5 HP British Seagull motor for sale in Washington on Craig’s List for the princely sum of $95! As someone who loves things pared down to the bare necessities, to say that I admire Seagull outboards would be an understatement.

According to the seller, the motor works well and my experience with Seagulls tells me that it’s typical for their motors to keep going forever.

Did I mention that the motor in question was built in 1956?

Of course, when asked if he would be willing to ship it to the Caribbean, the seller did not want the hassle of taking a motor to the local post office (bummer), but it did get me thinking…

The Seagull is a real exercise in simplicity and, as such, the idea of just building a reasonable facsimile is not out of reach of even the most ham-fisted DIYer.

Being that it’s 2022 and I really hate internal combustion engines, the home-cobbled Seagull I’m seeing in my head is going to be an electric motor that resembles a 66-year old Seagull.

I’m guessing the power source will be either 18V Ryobi or surplus 32V electric bike/scooter batteries. As I’m heavily invested in Ryobi tools, it kind of makes sense on one level but the large number of scooter/bike batteries available lends itself to the more oomph side of things. That said, the optimum HP needed for an eight foot pram dinghy is really only about 1HP so the Ryobi option might actually make more sense.

Obviously I have some more stuff to work through but it’s going on lunchtime and I have to do the galley thing. Hopefully, more soon come.