A required read, EBM reminds us who the usual suspects are, and something interesting/depressing about podcasting…

Today, instead of writing this blog as I wanted to do, I watched a bit of the House committee on UFOs. Sadly, it was a lot of talk with very little content. I wanted some serious information. Then again, I’d also like to see a lot of perp-walks as well.

Neither, it seems, is on the horizon.

What I was going to write about was that I came across an old North Face catalog and that in 1975, the North Face Cagoule was selling for the grand sum of $36.50. I’m pretty sure I spent less for mine, but even back in olden times I seldom ever bought anything that wasn’t on sale, being both poor and cheap. 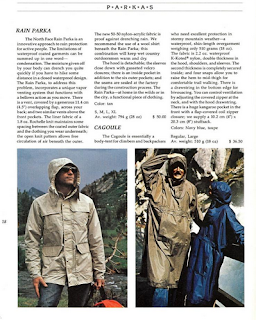 I used the Cagoule on many backpacking, climbing, and mountaineering expeditions where it kept me dry better than any other rain gear I’ve ever used.

When I started getting serious about sailing, the Cagoule became my go to foul weather gear and worked so much better than any bespoke marine foulies available then or now.

Might have been the best money I’ve ever spent on gear.

I really should buy some material, get out the sewing machine and make a new cagoule to replace the three not quite good enough foul weather jackets that are mostly just taking up locker space.

I don’t even have to design one as there’s an excellent pattern available.

Come to think of it, maybe I should make a couple. One that would be a clone of the North Face, one and another where I’d use neoprene like my old Great Pacific Iron Works foamback cagoule that I used after I wore my North Face out.

Still nothing interesting on the UFO front and I’ve concluded that, considering all that’s wrong, our only genuine hope of getting out of our current mess is an alien intervention.

Listening to a Tiny desk concert